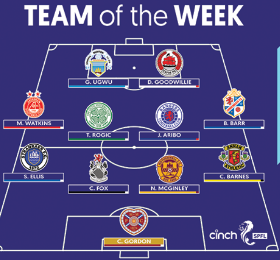 Craig Fowler from a View From The Terrace has published his latest Team of the Week on the official website of the Scottish Professional Football League, with two players of Nigerian descent making the cut.
Glasgow Rangers midfielder Joe Aribo and Greenock Morton striker Gozie Ugwu have both been recognized after their outstanding performances for their clubs at the weekend.
In a 4-4-2 formation, the Super Eagle has been deployed as one of the two central midfielders while the Reading academy product starts in attack.
Aribo caught the eye as Rangers demolished Dundee FC 3-0 at Ibrox Stadium, opening the scoring in the 36th minute before forcing an own early in the second half.
The Nigeria national teamer has been on fire since the start of November in the Scottish Premiership, scoring three in his last four games.
Ugwu has also caught the eye, but a division lower, with four goals in his last five matches in the Championship.
The 28-year-old joined Greenock Morton in the off-season after spending a season at another second-tier Scottish club Raith Rovers.
Ifeanyi Emmanuel
Copyright ANS