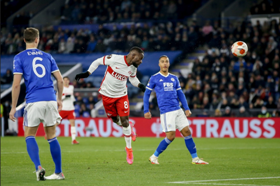 Two Nigerian players ranked in the top two positions in terms of fouls committed in the group stage of the UEFA Europa League.
According to the official website of UEFA, FC Midtjylland defensive midfielder Raphael Onyedika was the top fouler in the group stage of the Europa League after giving away seventeen fouls.
The FC Ebedei product was yellow carded on three occasions in 428 minutes played spread across five matches.
In second place for most fouls committed is former Chelsea wing-back Victor Moses with sixteen, only one less than his compatriot Onyedika.
The 2013 Africa Cup of Nations winner was cautioned in the 74h minute of the 1-1 draw with Leicester City at the King Power Stadium, his only booking in the group stage.
Onyedika and Moses suffered eight and seven fouls respectively and were not sent off in any of the matches.
Moses was the joint top assist provider in the Europa League, recording three across six matches, an honour he shared with Leicester City striker Kelechi Iheanacho and six other players.
Ifeanyi Emmanuel
Photo Credit : spartak.com
Copyright ANS