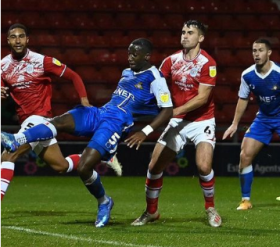 There are five goals to report in Football League matches involving Nigeria-eligible players on Saturday, December 11.
In the Championship, Luton Town striker Elijah Adebayo took his tally to ten for the season after his 62nd minute equaliser in a 1-1 draw with table toppers Fulham at Kenilworth Road.
The Fulham academy product headed home after getting on the end of a superb free-kick delivery, cancelling out Aleksandar Mitrovic's first half opener in the process.
Former Arsenal youth teamer Joseph Olowu netted the winning goal to give Doncaster Rovers an important 1-0 win over Daniel Udoh's Shrewsbury Town at Keepmoat Stadium in South Yorkshire.
With eleven minutes remaining the central defender headed in a corner from Rowe - his second league goal in four outings.
Still in League One, Rotherham United continue to lead the way in the division thanks to a 3-1 hammering of Burton Albion at the New York Stadium.
Former Flying Eagles invitee Freddie Ladapo broke the deadlock with a cheeky back flick in the 24th minute and restored the Millers one-goal advantage two minutes into the second half when he slotted the ball low under the Burton Albion goalkeeper.
Ladapo had registered eleven goals in all competitions this term comprising eight in League One, two in the Papa John's Trophy and one in the Emirates FA Cup.
Evergreen striker Adebayo Akinfenwa scored the pick of the goals as Wycombe Wanderers and AFC Wimbledon shared the spoils with a 2-2 draw at Adams Park.
The 39-year-old, off the bench in the 65th minute,  made it 1-1 with an audacious lob from outside the box after spotting the Wimbledon goalkeeper off his line at minute 74.
Ifeanyi Emmanuel
Copyright ANS