...the complete Nigerian football portal
Subscribe
Ex-Gunner Nwakali in touch with his mentor Eguavoen ahead of AFCON 2021
Published: December 14, 2021 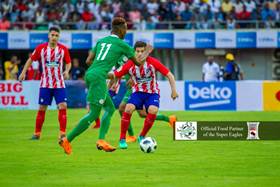 Allnigeriasoccer.com has been told that the appointment of Austin Eguavoen as Nigeria's interim manager has increased the likelihood of former Arsenal midfielder Kelechi Nwakali being named on the Super Eagles roster for the upcoming 2021 Africa Cup of Nations in Cameroon.
Nwakali was among the first set of players to congratulate Eguavoen on his new appointment but the former Super Eagles captain did not initiate the conversation.

Prior to the appointment of Eguavoen to take over the managerial reins, the 1994 Africa Cup of Nations winner has been acting as mentor to the SD Huesca midfielder.
Eguavoen has been very close to Nwakali all this while and has been telling the ex-Gunner to be patient, that his time with the Super Eagles will come, but making him the national team coach on an interim basis does not automatically mean that the player will be handed a call-up.
Having said that, Eguavoen's assistant Salisu Yusuf is also an admirer of the central midfielder, brightening the chances of the 2015 U17 World Cup Golden Ball winner earning another invite to the national team in the near future.
Nwakali has captained Nigeria at U17, U20 and U23 levels and shone on his non-competitive debut for the Super Eagles in a friendly against Atletico Madrid in May 2018.
The 23-year-old has been involved in 17 of the twenty games played by SD Huesca in the Spanish second-tier this season.
Ifeanyi Emmanuel