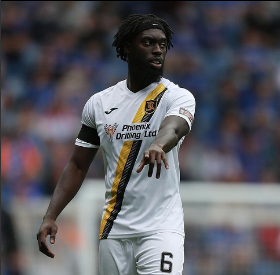 Livingston star Ayo Obileye believes Rangers ace Joe Aribo is good enough to play in the English Premier League amid speculation linking the versatile midfielder with possible moves to Brentford, Crystal Palace and Watford.
Obileye, a former Nigeria U23 invitee, knows all about the qualities of Aribo having played with him at the Charlton academy before they both moved on to pastures new.
The central defender is pleased with the progress Aribo has made since his arrival at Rangers.
"Joe is a great player. When I was with him at Charlton Athletic you got to see the potential he has and I'm happy he's showing it on the big stage, " Obileye told allnigeriasoccer.com.
"The ball is in his court to decide whether he wants to stay at Rangers for a few more years or move to the Premier League.
"I think he could play in the Premier League but that decision is up to him".
Obileye too has done really well since his arrival in Scotland, earning himself a move to top-flight Livingston in the summer transfer window on the back of his imperious displays for Queen of the South.
The goalscoring defender opened his Premiership account from the penalty spot last weekend against Dundee United and followed that up with a last-gasp equaliser in yesterday's draw versus Ross County.
"I'd like to say I'm the penalty taker for Livingston but the gaffer may have given it to the striker but he wasn't on the pitch at the time so I took it.
"Against Ross County, the manager put me up top to try a different approach and it was a good decision because we got the goal," Obileye concluded.
Ifeanyi Emmanuel
Copyright ANS