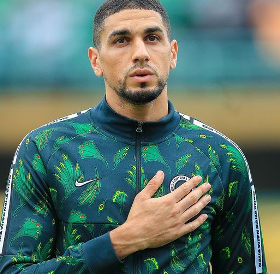 Nigeria's interim manager Augustine Eguavoen has hinted at a potential formation switch at the upcoming Africa Cup of Nations with some key players pulling out of the squad.
Glasgow Rangers star Leon Balogun, Napoli striker Victor Osimhen, Watford's Emmanuel Dennis and versatile fullback Abdullahi Shehu have been replaced on the roster by Semi Ajayi, Henry Onyekuru, Peter Olayinka and Tyronne Ebuehi receptively.
Erstwhile Super Eagles coach Gernot Rohr's preferred formation was a 4-2-3-1 but the Franco-German ended up using a 3-5-2 in his last three games in charge during the World Cup qualifiers.
Eguavoen says Osimhen and Dennis will be greatly missed at the Africa Cup of Nations and has revealed the exact nature of injury suffered by Balogun, who has been inactive for Rangers since he was substituted against Hibernian in the Premier Sports Cup on November 21, 2021.
On the missing players, Eguavoen said : "The only thing is to change the style of play because the personnel is not there as we expected.

"Definitely Victor Osimhen is a big miss, Emmanuel Dennis is in form, also a big miss.

"Leon Balogun we spoke as well, back injury, so be it. So we have to just alter the formation and how we approach the games as well but everybody in camp who replaces who doesn't matter.

"It is not a right to play for Nigeria, it is a privilege so this is green-white-green, you're given an opportunity I think you should take it."
Balogun, Osimhen and Shehu were members of the Super Eagles squad to the 2019 Africa Cup of Nations in Egypt.
Ifeanyi Emmanuel
Copyright ANS