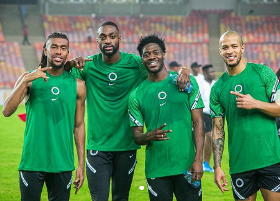 According to Italian transfer market website Tuttomercatoweb,  Leeds United are interested in signing Chelsea academy product Ola Aina in the January transfer window.
The Super Eagles star would be an intriguing option for Premier League clubs as he is capable of playing several positions in defence and midfield., coupled with the fact that he is a homegrown player.
Torino and Nigeria coaches have taken advantage of Aina's versatility by deploying him as a left-back, right-back, left wing-back and right wing-back.
The Nigerian has scored three goals in eighty five career games across stints with Chelsea, Hull City and Fulham.
Aina was loaned out to Fulham for the whole of last season but had to return to his parent club after the Cottagers higher-ups decided against signing all the players loaned in due to their demotion to the Championship.
The 25-year-old has entered the final eighteen months of his contract with Torino and they are keen to tie him down to a new deal.
Igho Kingsley
Copyright ANS