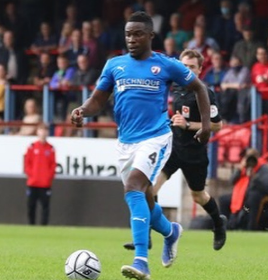 Nigeria-eligible midfielder Manny Oyeleke suffered a heavy defeat on his return to Stamford Bridge as Chesterfield were hammered 5-1 by Chelsea in the third round of the Emirates FA Cup on Saturday evening.
Oyeleke spent the formative years of his career as a footballer at the Chelsea academy, from 2002 to 2008.
The 29-year-old started for the fifth-tier side and came up against some of the best players in the Premier League including Mateo Kovacic, Christian Pulisic, Hakim Ziyech in addition to Romelu Lukaku.
The Blues were 3-0 up inside twenty minutes courtesy of goals from Werner, Hudson-Odoi and Lukaku.
Oyeleke was presented with an opportunity to reduce the arrears but his shot from twenty yards out swirled away from goalkeeper's Bettinelli’s right-hand post, before Christensen got on the scoresheet in the 39th minute.
Ten minutes into the second half, Ziyech converted a penalty to increase Chelsea's lead and in the 80th minute Asante netted a consolation for the National League side.
Oyeleke had stops at Brentford, Exeter City, Aldershot Town and Port Vale before joining Chesterfield in April 2021.
Ifeanyi Emmanuel
Photo Credit : Instagram