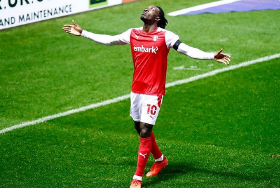 Sunderland are reportedly working on a deal to sign former Nigeria U20 invitee Freddie Ladapo.
Football League World says the Black Cats are interested in signing Ladapo from Rotherham United in the January transfer window.
The Millers record signing at £500,000 has handed in a transfer request as he aims to force his departure from New York Stadium before the close of the transfer window.
Ladapo was not utilized off the bench in Rotherham United's loss on penalties to Queens Park Rangers in the third round of the Emirates FA Cup on Saturday amid speculation surrounding his future.
The 28-year-old has entered the final six months of his contract and Rotherham United could be forced to sell him this window rather than losing him for nothing in the summer when his contract expires.
In the current season, Ladapo has scored 12 goals and provided three assists in 29 matches in all competitions.
He previously defended the colours of Colchester United, Crystal Palace, Southend United and Plymouth Argyle among others.
Ifeanyi Emmanuel
Copyright ANS