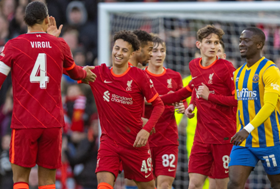 Liverpool are through to the next round of the Emirates FA Cup after coming from behind to thrash League One opponents Shrewsbury Town 4-1 at Anfield on Sunday afternoon.
Two players of Nigerian descent started for the visitors - striker Daniel Udoh and Manchester City academy product Nathanael Ogbeta - and they were both in action for 83 minutes.
Now 25, Udoh trained with the Golden Eaglets class of 2013 that included the likes of Kelechi Iheanacho, Taiwo Awoniyi and Francis Uzoho who are all on international duty with the Super Eagles in Cameroon for the Africa Cup of Nations.
The former Nigeria U17 invitee continued his rich vein of form when he found the net to give Shrewsbury Town a 1-0 lead after 26 minutes.
Ogbeta whipped a cross into the six-yard box which fell to Udoh and the Nigerian-born striker fired home from close range.
Jurgen Klopp's team were 2-1 up at the break after Kaide Gordon leveled the scoreline with a near finish in the 34th minute and Fabinho converted a spot kick at minute 44.
Roberto Firmino came off the bench to make it 3-1 with a cheeky finish in the 78th minute and Fabinho got his second of the game in injury time.
Udoh was named Shrewsbury Town's Player of the Month for December after scoring three goals and providing three assists in six games across all competitions.
Ifeanyi Emmanuel
Photo Credit : liverpoolfc.com
Copyright ANS