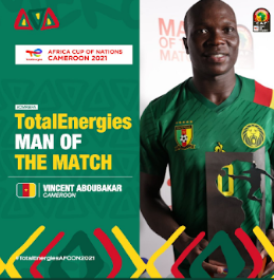 The Indomitable Lions lived up to their name after coming from behind to register a 2-1 victory over Burkina Faso in the opening game of the 2021 Africa Cup of Nations on Sunday evening at Stade d'Olembé,Yaoundé.

Gustavo Sangaré scored the tournament's first goal in the 24th minute as he volleyed home after Traore's stunning header was cleared off the line from a corner moments before.

Five minutes before the break, Vincent Aboubakar put Cameroon back on terms when he converted a spot kick and the former Porto star tucked in another penalty kick in first half stoppage time to ensure the hosts were ahead at the interval.

In the second half, Cameroon captain Aboubakar thought he had scored a hat-trick but it was disallowed by the referee after a VAR check.

Speaking at the end of game, 1994 Africa Cup of Nations winner Austin Okocha revealed that Aboubakar, who was named Man of the Match deserved the accolade and praised him for his leadership skills and work ethic.

Okocha said on SuperSport : "I think considering the fact that he put in a lot of shift today not just the penalties, you know he led by example and he really worked for his team.

"He could have gotten the third goal if he was a bit more composed in front of goal, he had some chances but then it wasn't meant to be but he did enough to get the Man of the Match."

Okocha was named Player of the Tournament for the 2004 Africa Cup of Nations and was joint top scorer with four goals.