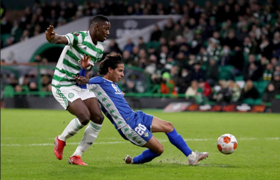 2019 Nigeria U23 invitee Osaze Urhoghide is reportedly wanted by a plethora of clubs in England and Scotland.

The Scotman says the Glasgow Celtic center back is drawing interest from a number of clubs in the Scottish Premiership and English Championship.

The stumbling block to a deal is that the Hoops have no intention of allowing him leave the club permanently in the January transfer window but are open to loaning him out to continue his development.

Urhoghide finished last season with seventeen appearances for Sheffield Wednesday but has struggled to break into the starting lineup of Celtic since transferring to the Premiership giants in the summer of 2021.

The 21-year-old impressed on his Celtic debut against Real Betis in the Europa League last month but could not build on that performance after suffering a training ground injury.

Manager Ange Postecoglou has not utilized Urhoghide off the bench in seventeen matches across all competitions so far this season.

Urhoghide's contract with Celtic runs out at the end of the 2024-2025 season.