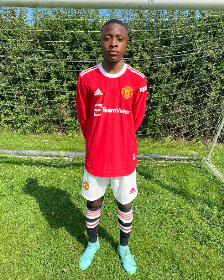 Manchester United have bolstered their academy ranks with the signing of Nigeria-eligible striker Majid Balogun.

Lambeth Tigers have taken to their official Instagram page to confirm that their U14 player Balogun has officially joined the Red Devils, becoming the second player in the club's history to join directly from grassroots from the South of England.

The statement added that the Anglo-Nigerian is the first player from the Tigers to join the red half of Manchester.

Balogun was on the wishlist of several unnamed clubs in England before United won the race for his signature.

The promising striker will be aiming to sign a scholarship with Manchester United in the next few years.

He links up with several players of Nigerian descent including Shola Shoretire, Dillon Hoogewerf, Victor Musa, Habeeb Ogunneye and Max Oyedele at the Manchester United academy.