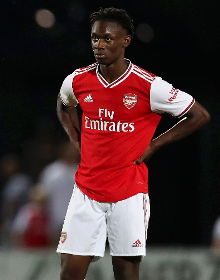 Championship club Middlesbrough are on the verge of announcing the signing of Arsenal's Anglo-American-Nigerian center forward Folarin Balogun.
According to respected Italian transfer market expert, Fabrizio Romano on Facebook, the deal taking the Hale End Academy graduate to the Riverside Stadium is done.
Romano has claimed that Balogun will undergo a medical on Tuesday, January 11 ahead of an official announcement of the capture of the 20-year-old.
The England U21 international didn't feature for the Gunners in their shock loss to Nottingham Forest in the Emirates FA Cup this past weekend after testing positive for coronavirus.
Boro reached a club-to-club agreement with Arsenal after talks that started six days ago.
Middlesbrough boss Chris Wilder is set to finally land his man after he was priced out of a deal during his time as Sheffield United manager.
Balogun has made ten career appearances for Arsenal's first team, scoring two goals in last season's Europa League.
Ifeanyi Emmanuel
Photo Credit : arsenal.com