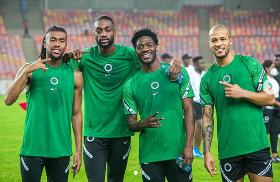 Torino wing-back Ola Aina says he is delighted to be named on the Super Eagles roster for the ongoing Africa Cup of Nations in Cameroon, branding the competition a 'massive tournament'.
The Chelsea-reared defender was a key player for the Super Eagles when they won bronze in Egypt, deputizing at left-back for the injured Jamilu Collins until the quarterfinals and went the distance in the third place playoff vs Tunisia.
Liverpool manager Jurgen Klopp used the phrase 'little tournament' to describe the Africa Cup of Nations but later clarified his remarks.
Aina has revealed the conversation he had with his childhood pal, Everton winger Alex Iwobi about the Africa Cup of Nations.
In an interview with OGTV monitored by allngeriasoccer.com, Aina stated : "It is not a little tournament, I was even saying to my roommate Alex today, I said when you come here and you are in the midst of everything you realize what privilege it is to participate in this tournament.

"The magnitude of this tournament is massive, I would never feel like it's a small tournament, the world shouldn't see it as a small tournament, it is very important."
Aina spoke about the atmosphere in camp ahead of the country's eagerly anticipated opener against Egypt and vowed to put in his best performance if selected by manager Augustine Eguavoen.
"It is very good, I love the atmosphere, the team is very close together, we're like a family which is very important in these type of tournaments.

"My personal goal that I've set for myself is just to play well for my teammates. For me I hate that feeling of letting people down."
Aina started four of the six matches the Super Eagles played during the 2021 Africa Cup of Nations qualifiers and provided two assists.
Ifeanyi Emmanuel
Copyright ANS