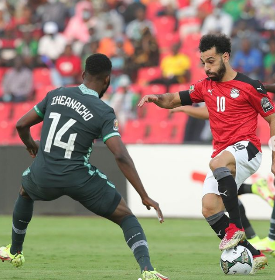 A goal from Kelechi Iheanacho was all Nigeria needed to begin their chase for a fourth Africa Cup of Nations title on a winning note in Group D to end Egypt’s record of not having lost in their group game in the tournament in the past 20 years.

Iheanacho put the Eagles ahead on the half-hour mark with a superb finish after a great move by Moses Simon.


The Nantes winger delivered a cross into the Egyptians' box with the ball eluding Taiwo Awoniyi.
However, Joe Aribo nodded it down onto the path of the Leicester City star who controlled with his thigh brilliantly and let fly a shot to the top right corner.
Overall the Eagles had five attempts at goal with just one going the Pharaoh's way in the first half.

Nigeria's keeper Okoye was instinctive to stick out his feet to save as Mohamed Salah beat an offside trap on 71 minutes.

Augustine Eguavoen rang the changes and introduced the duo of Sadiq Umar and Chidera Ejuke for Taiwo Awoniyi and Samuel Chukwueze in the 72nd minute.

CSKA Moscow winger Ejuke's first contribution was to hit a good shot which was repelled by the experienced Egypt goalkeeper Mohamed El Shenawi.


Ejuke went on a mazy run as the Super Eagles countered after a corner kick by the North Africans.
He should have found Alex Iwobi who was better placed but he went for glory and only won a corner kick for his efforts.
Three-time African champions Nigeria will face Sudan in their next group game on January 15.
Izuchukwu Michael
Photo Credit : cafonline.com
Copyright ANS
All rights reserved. This material, and other digital content on this website, may not be reproduced, published, rewritten or redistributed in whole or in part without prior express written permission from allnigeriasoccer.com