...the complete Nigerian football portal
Subscribe
'He was selfless' - Jay-Jay Okocha hails Awoniyi for sacrificing himself for the team vs Egypt
Published: January 12, 2022 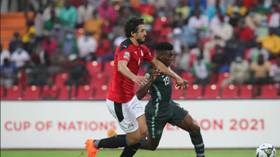 Nigeria legend Austin Okocha was delighted with the performance Taiwo Awoniyi put in during the Super Eagles' 1-0 win over Egypt in their Africa Cup of Nations opener on Tuesday evening.
Kelechi Iheanacho, playing in an attacking midfield role, won the game for the Super Eagles with a stunning strike in the 30th minute.

With Victor Osimhen and Paul Onuachu not with the team in Cameroon due to injuries they are recovering from and with Odion Ighalo not released by his Saudi Arabian club, Awoniyi had to shoulder the burden of scoring the goals against the North African opponents.

Five minutes into the second half, the former Liverpool striker appealed for a goal when he crashed a shot off the bar but replays and a VAR review confirmed the ball had not crossed the line.

Okocha highlighted how Awoniyi sacrificed himself for the team by putting pressure on the defence of Egypt.

The former Bolton Wanderers dazzler who was on punditry duties for SuperSport said : "Make yourself a nuisance (if you cannot score), work hard for the team.

"You can say that he's selfless, he's working ever so hard, he's kept that defence so busy and others are capitalizing on that".


2013 FIFA U17 World Cup winner Awoniyi made his full Super Eagles debut against the Egyptians and was replaced after putting in a 72-minute shift.
Igho Kingsley
Photo Credit : cafonline.com