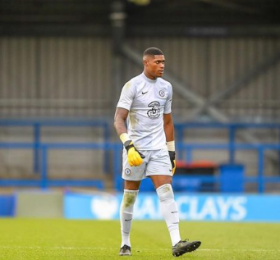 Chelsea have booked their place in the fifth round of the prestigious FA Youth Cup following a hard-fought 3-2 win over Watford at Vicarage Road on Thursday night.

2019 Golden Eaglets invitee Prince Adegoke started in goal for the Blues, while former Manchester United schoolboy Hamzat Balogun and striker Emmanuel Adeyemo were on parade from the off for the young Hornets.

It took Chelsea just nine minutes to take the lead as Harvey Vale cushioned the ball into the far post and they doubled their advantage through Mothersille who poked the ball over the line after the Watford defence were left exposed.

With a minute to go in the first half, Watford were given a lifeline when Adeyemo nicked the ball off Chelsea goalkeeper Adegoke and slotted into an empty net to reduce the deficit.

Adegoke was having an outstanding game before that individual mistake, making two outstanding saves to deny the Hornets.

Blake fired the ball home from close range in the 74th minute for 2-2 but Chelsea won it in extra time thanks to Vale's goal.

Olise, Mendel-Idowu and Flower were introduced off the bench in extra-time.