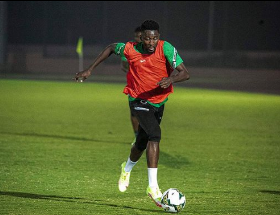 The Super Eagles held their penultimate training session on Thursday, before their second Group D fixture of the 2021 Africa cup of Nations against Sudan, allnigeriasoccer.com reports.

Alanyaspor central defender Chidozie Awaziem has all but been ruled out of the clash against the Falcons as he was not involved in team activities on the pitch for a third consecutive day.

A team official has claimed that Awaziem's absence is not related to the knock he picked up while training with the team at their pre-Africa Cup of Nations training camp in Abuja.

Kenneth Omeruo, who suffered a minor injury in the closing minutes against Egypt, participated in full training for a second straight day so there is no indication yet that the former Chelsea man won't be available for selection on Saturday.

The first fifteen minutes of Thursday's workout was open to the media but few curious journalists still managed to feast their eyes on the players through the barricade for the entirety of the session.

Augustine Eguavoen rounded off the training session with a practice game, splitting the squad into two groups - the probable starters and contenders.


The contenders won 2-1 with Onyekuru and Sadiq finding the net, while Nwakali scored with a beautiful volley for the probables.
Ifeanyi Emmanuel
Copyright ANS