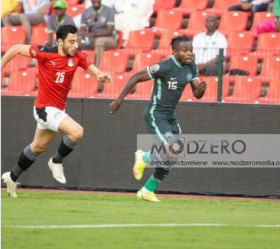 Allnigeriasoccer.com has been told that several unnamed English Premier League clubs are keeping tabs on Super Eagles dazzler Moses Simon at the ongoing Africa Cup of Nations.
Simon was arguably the standout player as Nigeria began their campaign at the 2021 Africa Cup of Nations with a 1-0 victory over Egypt on Tuesday evening.
If he keeps up his fine form in Cameroon, the Premier League clubs could make a move for the Golden Boot Soccer Academy product as from the January transfer window.
It is confirmed that Simon was offered to the likes of Liverpool, Newcastle United, Southampton and Brighton & Hove in previous transfer windows but the quartet passed up the opportunity to sign him.
But the diminutive winger has seen his stock rise in recent months following a string of fine displays for club and country.
Simon scored two goals and provided six assists for Nantes in eighteen French Ligue 1 matches before reporting for international duty.
His contract with Nantes is up at the end of the 2023-2024 season.
Ifeanyi Emmanuel
Copyright ANS