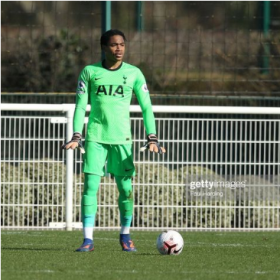 2021 Super Eagles invitee Joshua Oluwayemi made his first appearance for Tottenham Hotspur U23s since October as they were held to a 1-1 draw by Manchester United in a Premier League 2 clash on Monday night.
According to Football Insider, twenty two scouts were in attendance at Leigh Sports Village Stadium to run the rule over the top performers on both teams.
Manchester United wonderkid of Nigerian descent Shola Shoretire was also on parade and it was the England U19 international who opened the scoring in the 80th minute, converting a spot kick awarded after he was fouled in the box by Lyons-Foster.
Oluwayemi must have caught the eye of many of the talent spotters with some brilliant saves in the second half, denying Isak Hanson-Aaroen, Shoretire and Joe Hugill from close range.
The Nigerian glovesman has entered the final six months of his contract with Tottenham Hotspur and has been linked with possible moves to Jose Mourinho's AS Roma as well as Portuguese setup Benfica and Bundesliga outfit Stuttgart.
Oluwayemi has yet to make his senior debut for Tottenham Hotspur but has trained with the first team on multiple occasions and was the club's third choice goalkeeper at the back end of the 2020-2021 campaign.
Ifeanyi Emmanuel
Copyright ANS