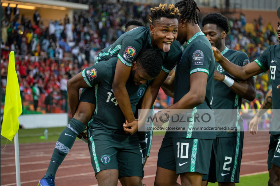 Joe Aribo has revealed that the Super Eagles are aiming for three points when they face off with Sudan in their second group game at the 2021 Africa Cup of Nations.

Nigeria can qualify for the last sixteen of the ongoing competition in Cameroon if they defeat the Falcons at the
Roumdé Adjia Stadium, Garoua this evening, with the Glasgow Rangers man expected to be involved in some capacity.

Playing in a hybrid role of a number six and number 8 but wearing the number ten on the back of his jersey, Aribo impressed on his Africa Cup of Nations debut against Egypt and capped off a fine performance by registering his first assist in Super Eagles colours.

Reflecting on his Africa Cup of Nations debut, Aribo told NFF TV : "It was really good, we knew it was important for us to stay solid, stay together as a team, work hard and give that extra ten percent.

Aribo spoke about preparations for the game against Sudan and shared his views on what to expect from the Super Eagles players.

"It has been very good, the boys are ready, we rested from the last game and we're just ready to go and prepared.

"Literally like the Egypt game we want to win every single game, we want to take every game as it comes so that's what we are aiming for to get the victory, get the three points and put in a good performance," he concluded.