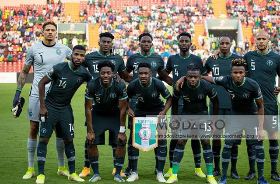 Nigeria are likely to parade the same starting lineup that defeated seven-time champions Egypt 1-0 on Tuesday when they play in their second Group D match of the 2021 Africa Cup of Nations in Cameroon against Sudan on Saturday evening.

Interim coach of the Super Eagles, Austin Eguavoen featured the exact players on the probables side that trained on Thursday  and there are strong indications that there will be few or no changes to the starting lineup as most of the players produced great performances in the opener against Egypt.
Former Arsenal star Kelechi Nwakali, who was the 12th man for the probable starters in the penultimate workout, is not sure of starting.
In goal, Maduka Okoye is expected to retain his place as the first choice goalkeeper while Chelsea academy product Ola Aina and Porto's Zaidu Sanusi are expected to be at the full back positions.

Despite an injury scare in the clash against Egypt, former Chelsea defender Kenneth Omeruo has returned to full training and is set to partner William Troost-Ekong in central defence.

Leicester City ace Wilfred Ndidi and Joe Aribo will anchor the midfield and an advanced Kelechi Iheanacho will play behind striker Taiwo Awoniyi while Moses Simon is almost certain to nail down a place on the left side of attack after his wonderful game against Egypt.