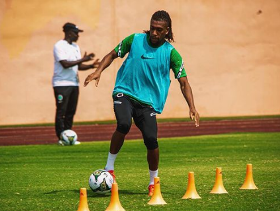 Alex Iwobi has promised to give his very best if called upon by manager Augustine Eguavoen for the Super Eagles second Group D fixture at the 2021 Africa Cup of Nations against Sudan.
One of the senior players in the Super Eagles squad, Iwobi was given a run out off the bench in the national team's 1-0 win over Egypt in their AFCON opener, replacing Moses Simon in the 90th minute.

The Hale End Academy product is one of two Super Eagles players to have made eight consecutive appearances at the Africa Cup of Nations, the other being holding midfielder Wilfred Ndidi.

Nigeria's recent result against one of the pre-tournament favorites Egypt sees them in confident mood heading into the fixture against the Falcons, but the Everton winger has warned his teammates that they should not be complacent.

Speaking to NFF TV after training on Friday, Iwobi said : "Personally I am always ready no matter what game it is. Obviously it is a big competition and we've already made our mark in the first game but we can't be complacent.

"We are going to give the same desire that we showed in the first game and hopefully get the result we need.

"The team is really psyched up especially after that first performance but we are not going to rest on our laurels so we are going to keep on going .

"We are hungry and we want to prove a point in this tournament.

Iwobi has made 51 appearances for the Super Eagles since his international debut against Democratic Republic of Congo in October 2015 and has nine goals to his name.