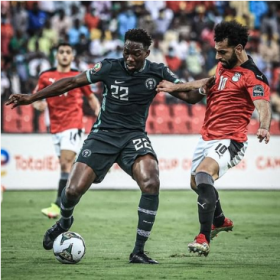 The CD Leganes center back saw himself climb up the pecking order of central defenders after Rangers ace Leon Balogun withdrew from the roster as a result of injury and his other rival for a starting spot Chidozie Awaziem is currently nursing a ankle complaint.

Omeruo and Troost-Ekong were brilliant against Egypt, helping Maduka Okoye to keep a clean sheet on his Africa Cup of Nations debut.

The former Golden Eaglets and Flying Eagles star suffered a knock in the closing minutes of the win against the seven-time Africa Cup of Nations but participated fully in all the training sessions leading up to the clash against Sudan, putting him in contention to continue to partner Troost-Ekong in central defence.

"It was easy. He's someone I've played with a couple of times. We played together, trained together so it wasn't difficult. We understand ourselves," Omeruo said to NFF TV.

"In the game we knew we had to talk to ourselves and it was important to have coverage behind."


Omeruo was a key member of the last Super Eagles squad to win the Africa Cup of Nations, going the distance in six matches during the tournament in South Africa.
Ifeanyi Emmanuel
Copyright ANS