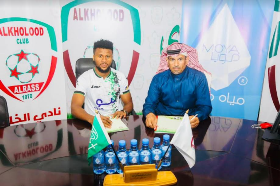 Allnigeriasoccer.com understands that Nigerian center forward Aniekpeno Udo has completed his transfer to Saudi Arabian outfit Al-Kholood Club.
The 25-year-old has joined the Saudi First Division League side on a free transfer after ending his association with KuPS in Finland.
Udo has put pen to paper on a five-month contract with Al-Kholood Club, a deal that sees him remain at the second-tier club until the end of the 2021-2022 season.
A product of Akwa United in his homeland, he departs KuPS after scoring nineteen goals in sixty three matches for the club over the course of the 2021 season, including appearances in the Europa and Champions League qualifying rounds.
Since moving abroad in 2016, Udo has spent time at Viking FK, Levanger FK and Ljungskile, scoring an impressive 33 goals and providing 12 assists in 50 games for the Swedish team.
Al-Kholood occupy the ninth position in the Saudi second-tier with twenty nine points from twenty matches.
Ifeanyi Emmanuel
Copyright ANS
All rights reserved. This material, and other digital content on this website, may not be reproduced, published, rewritten or redistributed in whole or in part without prior express written permission from allnigeriasoccer.com