...the complete Nigerian football portal
Subscribe
'Our plan is to win all the games' - Orlando Pirates star ahead of potential AFCON debut off bench
Published: January 18, 2022 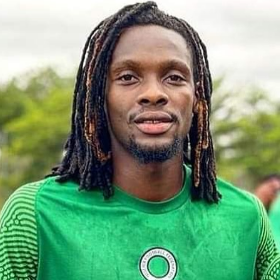 Orlando Pirates rising star Olisa Ndah is in confident mood ahead of a potential Africa Cup of Nations debut off the bench in Wednesday evening's Group D meeting between Nigeria and Guinea-Bissau.
The central defender has yet to taste action in Cameroon though he made the matchday squads for the games against Egypt and Sudan.
Given the dead rubber nature of the game against the African wild dog, interim boss Augustine Eguavoen is expected to rest some key players, putting Ndah in contention to make his senior debut for Nigeria.
The former Dream Team VII star wants the Super Eagles to finish the group stage on a high note by registering maximum points and has stressed that he's not disappointed that he has not been given minutes so far.
"Our plan is to win all the games. All games are important," Ndah said.

"I am not disappointed at all I have not played, this is the national team not clubside.

"Here we have been playing fantastic so I'm not bothered. I'm just happy with winning".
Ndah was considered for Super Eagles selection thanks to his exploits at Orlando Pirates, for whom he has made thirteen appearances in the DSTV Premiership so far this season.
Ifeanyi Emmanuel
Copyright ANS
All rights reserved. This material, and other digital content on this website, may not be reproduced, published, rewritten or redistributed in whole or in part without prior express written permission from allnigeriasoccer.com