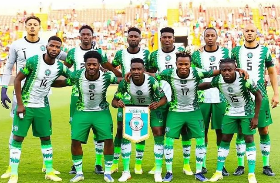 Nigeria's caretaker coach Augustine Eguavoen is aware that the 2021 Africa Cup of Nations round of sixteen clash against one of the the teams that qualifies in third place from Group B, E or F may go to extra time, then penalties, allnigeriasoccer.com reports.
And as a result, the three-time African champions practiced spot kicks in their penultimate workout held on Monday night at the VSTS-Annex of Roumde Adjia Stadium, Garoua.
Just as Eguavoen promised that he was going to work on the players converting their chances, Monday's session focused on the drill with the probable starters and likely substitutes taking part, while the rest of the players were involved in a lighter session.
The Super Eagles rounded off the training session with penalty practice with all the players taking part.
Nigeria's designated penalty taker Victor Osimhen, who has scored three international goals from the spot, is not with the team in Cameroon, the next in line for penalty duties Odion Ighalo is also not available for selection and experienced squad member Ahmed Musa is not guaranteed to be on the pitch should the round of 16 clash be decided on penalties.
First choice goalkeeper Maduka Okoye who has already been beaten from the spot in the group stage looked shaky during the penalty practice.
The likes of Henry Onyekuru, Kelechi Iheanacho, Chidera Ejuke and Tyronne Ebuehi dispatched their kicks with precision, while Sadiq Umar and Peter Olayinka managed to convert their second attempts after missing their first spot kicks.
Ifeanyi Emmanuel
Copyright ANS
All rights reserved. This material, and other digital content on this website, may not be reproduced, published, rewritten or redistributed in whole or in part without prior express written permission from allnigeriasoccer.com