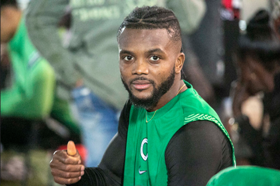 Chidozie Awaziem has broken his silence following his return to training ahead of the national team's dead rubber clash against Guinea-Bissau at the 2021 Africa Cup of Nations on Wednesday evening.
After much speculation and all the conspiracy theories, the former Porto star showed up in training on Monday - the first time he was spotted in public since January 10, a day before Nigeria's opener.
Awaziem, himself, has echoed the words of manager Augustine Eguavoen, saying that he was sidelined due to a minor injury.
"I feel happy, I am very good now. I had a little knock and I was doing recovery with the physios, right now I am back," Awaziem told the News Agency of Nigeria after Monday's workout.

"Hopefully, It's the decision of the coach but I know right now I'm good to go. Everyone is ready, every game is important so we are going to go for victory."
Awaziem went on to reveal that he was in good spirits during his spell on the sidelines as the Super Eagles won all their matches and is confident they can maintain their one hundred percent record in the group stage.
On how he felt when he was down : "I didn't feel bad, I was happy because the team was winning.
"I was motivated by the players and I'm so happy the way we are going in the competition, everything is good."
Awaziem helped the Super Eagles finish third in the last Africa Cup of Nations, playing six matches including five starts.
Ifeanyi Emmanuel
Copyright ANS
All rights reserved. This material, and other digital content on this website, may not be reproduced, published, rewritten or redistributed in whole or in part without prior express written permission from allnigeriasoccer.com