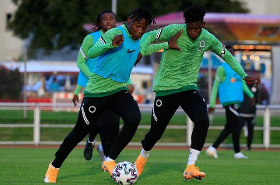 English Premier League side Watford are on the verge of announcing the capture of Super Eagles winger Samuel Kalu on a multi-year contract, the player's agent William D'avila has confirmed.
Kalu has agreed personal terms with the Hornets, paving the way for him to travel to the United Kingdom to undergo a traditional medical on Wednesday morning ahead of a potential unveiling.
The Golden Boot Soccer Academy product is departing French Ligue 1 club Bordeaux after a goal involvement of eighteen (10 goals, 8 assists) in 86 appearances across all competitions.
Kalu had been on the radar of Watford in the January transfer window but the club's sporting director Cristiano Giaretta played down a move for the 24-year-old just last week.
Asked to confirm reports of Kalu's imminent move to Watford, William D'avila told allnigeriasoccer.com on Wednesday morning : "The reports are correct. He has agreed a four-and-a-half-year deal."
Former AS Trencin and KAA Gent star Kalu shares the same agent as Watford midfielder Oghenekaro Etebo.
Ifeanyi Emmanuel
Copyright ANS