Subscribe
'He's on fire' - Teenage Charlton winger names the Super Eagle that has impressed him most at AFCON
Published: January 21, 2022 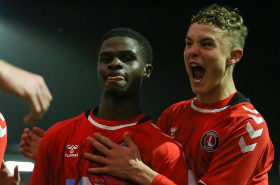 Charlton Athletic youth teamer Tolu Ladapo has singled out Moses Simon as the Super Eagles player who has impressed him the most at the ongoing Africa Cup of Nations.
After three career assists at the Africa Cup of Nations, the Nantes winger finally opened his tournament account when he chested the ball down and slotted home thirty five seconds after the restart against Sudan.
Simon was also impressive off the bench against Guinea-Bissau and already several English Premier League clubs are keeping tabs on his performance in Cameroon with a view to a possible swoop to land his signature.
"I have been watching the Africa Cup of Nations and I'm really proud of how Nigeria started the tournament, three wins out of three and we played well in the last games," Ladapo told allnigeriasoccer.com.

"It has been a great start to the tournament and hopefully we continue with that.

"One player who has caught my eye is Moses Simon. He has looked a real threat all tournament, he scored against Sudan. He's on fire, I'm definitely going to be watching him and other Africans that are coming up."

Born in South East London, England seventeen years ago, Ladapo is eligible to represent Nigeria through his father as well as his country of birth.
The exciting winger is hoping to play international football in future and will hold talks with his family before deciding whether to represent the Young Lions or Flying Eagles.
"I am eligible to play for both Nigeria and England, and it's a great honour for all footballers to play international football so I'll be really proud to represent either nation.

"However, I have not really thought about it and I am going to discuss it with my family."
Ladapo was impressive as Charlton Athletic booked their place in the fifth round of the FA Youth Cup with a 2-1 win over Accrington Stanley at the Wham Stadium on Tuesday.
Ifeanyi Emmanuel
Copyright ANS