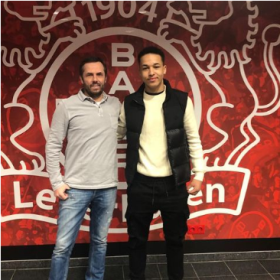 Isaiah Okofar, the younger brother of Red Bull Salzburg striker Noah Okafor, has taken to social media to announce his transfer to German Bundesliga outfit Bayer Leverkusen.
Aged sixteen, the younger Okafor is eligible to represent the Nigeria national teams as well as Switzerland where he was born, unlike his sibling who is cap-tied to the European nation.
A center-back by trade, Isaiah is joining Beyer Leverkusen from the youth team of FC Basel.
Writing on Instagram, the promising teenager said (translated to English) : "The long wait is over. I'm very happy to have signed my contract with Bayer 04 Leverkusen.

"I would like to thank everyone responsible. Bye for now".
Isaiah will be hoping to follow in the footsteps of his sibling Noah who left FC Basel for Red Bull Salzburg as a teenager and quickly broke into the first team of the Austrian Bundesliga giants.
A third Okafor, Elijah wears the colours of FC Basel's U21 team.
Ifeanyi Emmanuel
Copyright ANS