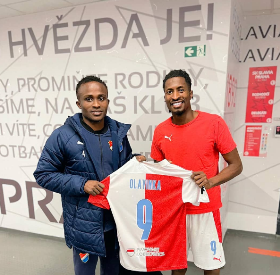 Three Nigerian attack-minded players have changed clubs within the last five days, allnigeriasoccer.com reports.
Peter Olayinka will re-join Slavia Prague after Africa Cup of Nations duty with his mentee turned rival waiting to welcome him.
Nigerian winger Yira Sor has signed a multi-year contract with Slavia Prague until December 2026, the Czech First League side announced through their official website on January 21.
The 2019 FIFA U20 World Cup star has landed at Slavia Prague from another Czech top-flight club Banik Ostrava, for whom he scored 4 goals and provided 5 assists in 19 matches this term.
On Olayinka, Sor said : "When I played against Slavia he told me to work hard, to be determined, that at some day I would get higher. It is great to have such a friend, such a mentor."
Sor's transfer to Slavia Prague involves Dream Team VI winger Ubong Ekpai moving in the opposite direction.
The 26-year-old Ekpai has joined Banik Ostrava on loan until the end of the 2021-2022 season.
Former AC Milan striker Ezekiel Henty has joined Saudi Arabian club Al-Hazem FC on loan from SK Slovan Bratislava , the Slovakian champions officially announced on January 21.
The loan agreement also includes a permanent transfer option at the end of the season.
Ifeanyi Emmanuel
Copyright ANS