Subscribe
'I could be going out on loan' - Arsenal's Anglo-Nigerian RB makes revelation about temporary transfer
Published: January 27, 2022 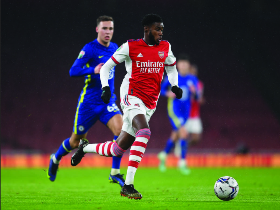 Arsenal right-back Ryan Alebiosu has made a revelation about a potential loan transfer away from the Emirates Stadium as from the January transfer window.
The Anglo-Nigerian is pushing to break into Arsenal's first team having been included in the matchday 20 for their last two matches against Liverpool (Carabao Cup) and Burnley (Premier League).
Alebiosu was expected to complete a loan switch to League One club Sunderland on deadline day last August, only for the proposed deal to collapse at the last minute.
The 20-year-old has been putting in extra work in training to improve his defensive skills in order to get himself ready for the physical demands of the Football League.
"I’ve also been putting in some more extra work on my one-on-one defending and heading this season, because who knows, I could be going out on loan and wherever I go, there could be more to the game than just being good on the ball," Alebiosu told Arsenal's Matchday Programme.

"I want to make sure I’m ready for the physical challenges of senior football, so that I show the club what I can do and hopefully one day get my chance in the first team. That’s my dream."
Alebiosu has been in outstanding form for the Gunners development squad this season, with a goal involvement of eight in fourteen appearances combined in the Premier League 2 and Papa John's Trophy.
Ifeanyi Emmanuel
Photo Credit : arsenal.com
Copyright ANS