Subscribe
Rangers boss reveals why he resisted the temptation to include Aribo in squad vs Livingston
Published: January 27, 2022 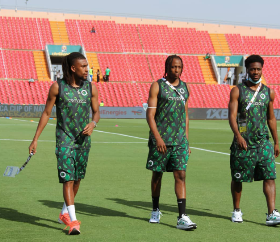 Rangers boss Giovanni van Bronckhorst has confirmed that Joe Aribo has returned to Glasgow after international duty with the Super Eagles at the ongoing Africa Cup of Nations.
The Nigeria number 10 is at the disposal of the Dutch football tactician for upcoming Scottish Premiership games against Ross County, Celtic and Hearts, something which would not have been possible had the Super Eagles reached the final of the Africa Cup of Nations.
Van Bronckhorst jettisoned the idea of including Aribo in his matchday squad for Wednesday's home win versus Livingston because the midfielder was fatigued after flying back from Africa.
Speaking to Rangers TV after the game, Van Bronckhorst said : "Joe is back from his time at the Africa Cup of Nations. He had a very tough trip to come back to Glasgow.

"He's here today so we will get him ready for Saturday as well".
He added : "It's very tempting to put Joe straightaway in the team but he's had two days of flying back from Nigeria so those are the decisions you have to take because it's not only the game tonight but we play many more games the coming  weeks.
"Sometimes you also have to be thinking a little bit rational and say this is a smart thing to do".
With the exception of the dead rubber final group game against Guinea-Bissau, Aribo started all the games played by the Super Eagles at AFCON 2021.
Ifeanyi Emmanuel
Copyright ANS