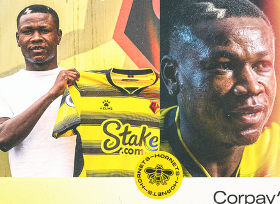 Watford have made some good additions to the squad in the January transfer window as they aim to avoid the drop at the end of the season.

Their most recent acquisition is Samuel Kalu who became the fifth Nigerian player signed for Watford's first team this season, after Emmanuel Dennis, Oghenekaro Etebo, Dapo Mebude and Maduka Okoye.

Watford hero Tommy Mooney is excited by the Hornets' capture of Kalu from Bordeaux and believes the Golden Boot Soccer Academy product is a similar kind of player to Dennis.

Dennis has enjoyed a brilliant start to his career at Vicarage Road, scoring eight goals and five assists in nineteen appearances in the Premier League.

Speaking on this week's episode of Inside The Hive, Mooney said : "I have watched some clips of him, playing for Bordeaux.

"Very similar in style to Emmanuel Dennis, perhaps prefers to play off the left hand side but comes in on his right foot.

"An exciting attacking threat similar to what we have already so I'm sure he'd be delighted to finally get a chance to play in the Premier League".

Kalu spent three and a half seasons at Bordeaux, scoring 10 goals and registering eight assists in 86 appearances across all competitions.