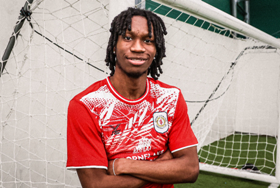 League One club Crewe Alexandra completed the signings of two promising players of Nigerian descent on Friday, January 28.
The Railwaymen have bought in Tariq Uwakwe from Chelsea on an eighteen-month contract, a permanent deal that sees him end a fifteen-year association with the European champions.
The 22-year-old is capable of playing as a wing-back, winger and in midfield, and has League One experience under his belt having made fifteen appearances in the division during a loan spell at Accrington Stanley in 2020-2021.
Uwakwe has played friendly matches for England at U18, U19 and U20 levels, meaning he remains eligible to represent the Super Eagles.
Another Anglo-Nigerian wing-back in Ryan Alebiosu has joined Crewe Alexandra on loan until the end of the 2021-2022 campaign in search of regular first team football.
Also comfortable being deployed as a right-back, Alebiosu was named in Arsenal's matchday squad for their recent matches against Liverpool and Burnley in the Carabao Cup and Premier League respectively.
Alebiosu and Uwakwe link up with Rio Adebisi and Tyreece Onyeka at Crewe Alexandra.
Ifeanyi Emmanuel
Photo Credit : crewealex.net
Copyright ANS