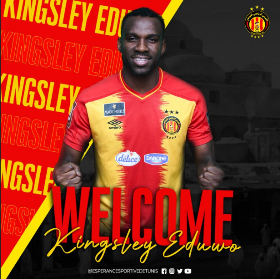 Tunisian powerhouse Esperance have completed the signing of former CHAN Eagles striker Kingsley Eduwo, the four-time African champions officially announced on Friday.
Eduwo has signed a two-and-a-half-year deal that will keep him at Esperance until at least the end of the 2023-2024 season if both parties honour the agreement.
The 25-year-old counts CS Sfaxien, Al-Najaf and Al Urooba as the foreign clubs he previously represented and has also worn the colours of Gateway United, Sunshine Stars and Lobi Stars in his homeland.
Eduwo has already started training with his new teammates at Espearance.
Still on transfer news, Belgian Pro League side KAA Gent have reached an agreement with Hertha BSC for the loan of 24-year-old German-Nigerian central defender Jordan Torunarigha.
Torunarigha,  a player of interest to the Nigeria Football Federation and erstwhile Super Eagles coach Gernot Rohr, has joined KAA Gent in search of regular first team football.
The former Germany youth-teamer has been on the books of Hertha Berlin for sixteen years.
Igho Kingsley
Copyright ANS