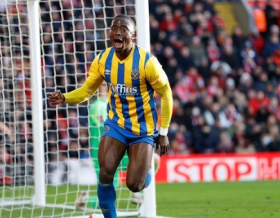 There are six goals to report in Football League matches involving Nigeria-eligible players on Saturday, January 29.
We begin in the Championship. Bournemouth are now third in the standings after a 1-0 win over Barnsley at Oakwell.
Danish-Nigerian midfielder Philip Billing scored what proved to be the winning goal when he headed home after  Dominic Solanke looped a ball into the box in the 12th minute.
Still in the division, Queens Park Rangers registered a convincing 4-0 win over Ovie Ejaria's Reading at Kiyan Prince Foundation Stadium (London).
Luke Amos netted his second of the season at minute 37 when he sprinted clear and fired in off the bar for Rangers third goal.
Former Golden Eaglets invitee Daniel Udoh scored for the eighth time in League One this term as Shrewsbury Town were held to a 1-1 draw by AFC Wimbledon at the Cherry Red Records Stadium.
Just before the hour mark, Udoh's scrambled in goal ensured Shrewsbury got a point from the contest.
In a one-sided show at University of Bolton Stadium, Bolton Wanderers thrashed Sunderland 6-0.
Dapo Afolayan beat the Black Cats goalkeeper from close range to double the advantage in the 41st minute before setting up his team's third goal five minutes after the restart.
In the League Two, Isaac Olaofe and David Ajiboye outshone the rest of their teammates as Sutton United claimed an impressive 2-0 road win at Carlisle United.
Midway through the first half, Olaofe fired the U's ahead before Ajiboye finished off a move to double the lead in the 31st minute.
Igho Kingsley
Copyright ANS