...the complete Nigerian football portal
Subscribe
'The correct next step for me' - Amoo after completing move to FCK until end of 2026
Published: January 31, 2022 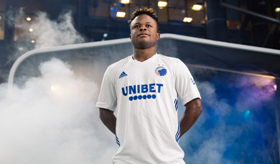 Hammarby's Nigeria underage international Akinkunmi Amoo has completed his transfer to FC Copenhagen on a deal until the end of 2026, the Danish Superliga side announced via their official website on Monday morning.
An influential member of the Golden Eaglets squad to the 2019 FIFA U17 World Cup, Amoo boasts 13 goals and nine assists from 48 appearances for Stockholm club Hammarby, who he joined as a youth player.
The Sidos Academy product was pleased to join FC Copenhagen , stressing that he had other options but thought it best to continue his career with the 13-time Danish champions.
Speaking to the official website of FCK after the deal was confirmed, Amoo said : "FCK is an international club with ambitions to compete against the biggest teams in Europe, and I was really attracted to be part of these ambitions.

"There have been other opportunities for me along the way, but I feel that FCK is the correct next step for me in terms of career. Here I can develop and learn a lot together with the fantastic players that the club already has.

"I'm really looking forward to the challenge and to stepping into Parken, which is a fantastic stadium with passionate fans."
FC Copenhagen coach Jess Thorup has described his newest recruit as an absolutely incredible athlete and can really put people off with his dribbles.
Ifeanyi Emmanuel
Photo Credit : fck.dk
Copyright ANS