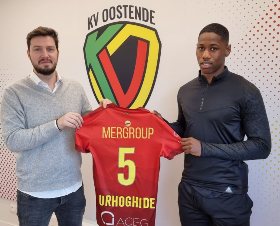 Belgian First Division A club K.V. Oostende have completed the signing of 2019 Nigeria U23 invitee Osaze Urhoghide on loan for the remainder of the season.
The Anglo-Dutch-Nigerian central defender has been starved of playing opportunities since he landed at Celtic from Sheffield Wednesday last July.
He made his Europa League debut against Real Betis in December and impressed at right-back though his preferred position is center-back.
In his first words as a player of KVO, Urhoghide stated : "I'm a defender who doesn't shy away from duels, I like hard defense and I always give 100% for the colors of my club.
"At an absolute top club like Celtic, it is no easy task to become a basic player as a young player. I learned a lot every week during training, but now it was time for me to also make effective playing minutes.
"That is also the reason why I chose KVO. This club has a philosophy to give young players opportunities and make them better and that sounds like music to my ears. I hope to be able to play my first minutes here soon."
Urhoghide was pictured holding a jersey with the number five at the back during his unveiling on Monday evening.
The 21-year-old spent the formative years of his career as a footballer with the youth teams of CB Hounslow United and AFC Wimbledon.
Ifeanyi Emmanuel
Photo Credit : kvo.be
Copyright ANS