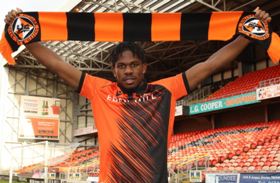 The Nigerian-born youngster has been farmed out on loan to Dundee United in a bid to experience first team football which he cannot get at the Gunners, with the likes of Thomas Partey, Granit Xhaka, Albert Sambi Lokonga and Mohamed Elneny ahead of him in manager Mikel Arteta's pecking order of central midfielders.

Akinola is best suited to play as a defensive midfielder and can also be deployed at center-back.


The 20-year-old is in contention to make his professional debut for Dundee United in Tuesday night's derby against Dundee in the Premiership.
In the current season, he has appeared in twelve Premier League 2 matches and was named captain against West Ham United on January 14, and was also in action against Football League teams Plymouth and Ipswich Town in the Papa John's Trophy.
Akinola joined Arsenal from Huddersfield Town in the summer of 2020.
Ifeanyi Emmanuel
Copyright ANS