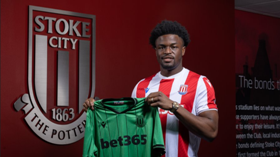 EFL Championship club Stoke City have completed the signing of Nigeria international Josh Maja, informs the official website of the Potters.
Subject to international clearance, Bordeaux-owned striker Maja will be spending the remainder of the season on loan at Stoke City.
The Nigerian becomes the club's fifth signing of the January transfer window, after Taylor Harwood-Bellis, Phil Jagielka, Lewis Baker and Jaden Philogene-Bidace.
Maja has returned to fitness after missing the first four months of the 2021-2022 campaign due to a back injury.
Commenting on the signing of the Super Eagle, manager Michael O’Neill said : "Josh will bring a different dimension to our attacking options and I’m really pleased that we’ve held off competition from a number of other clubs to secure him."
Maja also spent the second half of last season on loan at an English club, playing fifteen matches for Fulham in the Premier League with three goals to his name.
Ifeanyi Emmanuel
Photo Credit : stokecityfc.com
Copyright ANS