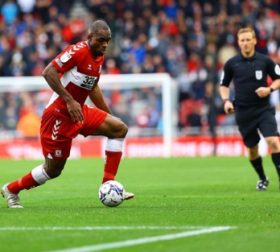 Through their official website, Championship outfit Cardiff City confirmed the signing of Anglo-Nigerian-Ugandan center forward Uche Ikpeazu just before the close of the January transfer window.
Born in England to a Nigerian father and Ugandan mother, Ikpeazu has been loaned out by Middlesbrough to the Bluebirds for the remainder of the 2021-2022 season.
His previous clubs include Reading, Watford, Hearts and Cambridge United, and he also enjoyed loan spells at Crewe Alexandra, Doncaster Rovers, Port Vale and Blackpool during his time at Vicarage Road.
For the remainder of the season, the 2015 Nigeria U23 invitee will wear the number 10 at the back of his jersey.
Also on deadline day, Dutch-Nigerian-Togolese striker Emanuel Emegha completed a switch to Belgian First Division A outfit Royal Antwerp.
Born in the Netherlands to a Togolese father and Nigerian mother eighteen years ago, Emegha ended his association with Sparta Rotterdam by putting pen to paper on a five-year contract with Royal Antwerp.
The Netherlands U19 international has been handed the number 44 jersey for the remainder of the campaign.
Ifeanyi Emmanuel
Copyright ANS