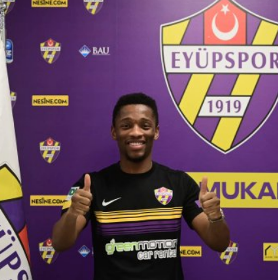 Through their social media channels, Turkish First League side Eyüpspor have announced the loan capture of  Jesse Sekidika from Galatasaray.
The 25-year-old has signed a contract that will keep him at the second-tier club until the end of the 2021-2022 season.
Sekidika, who can be deployed on either flanks as well as center forward, spent the first portion of the season on loan at Belgian outfit Oud-Heverlee Leuven, for whom he made three appearances and scored one goal.
It is believed that Galatasaray have recalled him from OH Leuven due to his limited game time.
Speaking on his new recruit, Vice President of Eyüpspor, Fatih Kulaksız said : "Sekidika was a player we wanted since the beginning of the season. We think it will be very beneficial for Eyüpspor. Good luck for both parties.
"We would like to thank the President of Galatasaray, Mr. Burak Elmas, who facilitated this transfer."
Sekidika has totaled 19 appearances for Galatasaray after he was snapped up from Eskisehirspor in January 2020.
Igho Kingsley
Copyright ANS