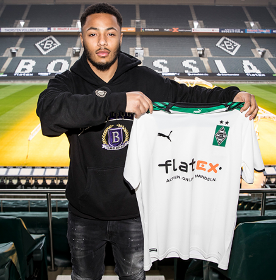 Through their official website, German Bundesliga club Borussia Monchengladbach have announced the signing of Manchester United winger Dillon Hoogewerf on a permanent deal.
The Dutch-Nigerian will initially start with  Borussia Monchengladbach U23 team who compete in the Regionalliga West (IV), equivalent of fourth-tier of German football.
Hoogewerf is leaving Manchester United without making his professional debut and less than three years after a celebrated move from Ajax Amsterdam.
The 18-year-old directly participated in 27 goals (15 goals, 12 assists) in 32 appearances in the U18 Premier League and was involved in three goals in 18 Premier League 2 matches.
Hoogewerf also appeared for the Red Devils youth teams in the FA Youth Cup, EFL Trophy and UEFA Youth League.
"Dillon Hoogewerf is a top talent. He's an unbelievably fast, tricky player who can also act as a winger from behind the attacker," says Borussia's director of the youth academy, Roland Virkus.
"We are delighted that Dillon has chosen Borussia and the path we have shown him."
Hoogewerf, who is eligible for Nigeria through his mother,  has played a total of 19 international matches for the Dutch youth national teams – eight for the U15s (6 goals), five for the U16s (2 goals) and six for the U17s (2 goals).
Ifeanyi Emmanuel
Photo Credit : borussia.de
Copyright ANS