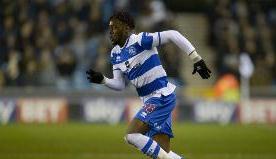 According to Football League World, Anglo-Nigerian striker Aramide Oteh has agreed a move to League Two club Crawley Town.
The former Tottenham Hotspur youth-teamer is currently unemployed following his departure from Salford City at the end of his short-term contract in January.
Crawley manager John Yems has decided to take a chance on Oteh as his side push for a playoff spot.
If the deal goes through as expected, the 23-year-old will provide competition to Kwesi Appiah and Ashley Nadesan.
Oteh spent eleven years at the Tottenham Hotspur academy before joining Queens Park Rangers where he played alongside Nigerian Federation target Eberechi Eze.
He enjoyed loan spells at Walsall, Bradford City, Stevenage and Colchester United prior to his release by Queens Park Rangers upon the expiry of his contract in June 2021.
Oteh has played 84 games in the Football League, scoring eleven goals.
Ifeanyi Emmanuel