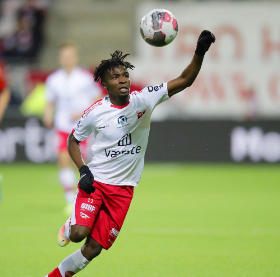 French Ligue 1 club FC Lorient completed the signing of promising Nigerian left winger Taofeek Ismaheel before the close of the January transfer window.
The official website of Lorient has informed that the 21-year-old has signed a deal until June 2025 with The Merlucciidaes.
Ismaheel, who last wore the colours of Fredrikstad, was immediately loaned out to Norwegian top-flight club Vålerenga Fotball for the remainder of the Ligue 1 season.
He is credited with 33 appearances in a Fredrikstad jersey with a goal involvement of 21 (13 goals, 8 assists).
The talented winger is returning to Oslo having played for Skeid Oslo from 2019-2021.
He participated in thirty-seven matches at Skeid Oslo, scoring six goals and setting up his teammates on four occasions.
FC Lorient pay the wages of Super Eagles striker Terem Moffi, the club's top scorer last season with 15 goals in 34 matches across all competitions.
Igho Kingsley
Photo Credit : fclweb.fr
Copyright ANS