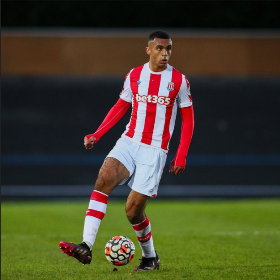 Through their official website, Championship outfit Stoke City announced on Tuesday that Nigeria-eligible central defender David Okagbue has been loaned out to Chester.

The promising teenager will spend the next one month at the National League North club on work experience.

He signed a scholarship deal with the Potters in summer 2020 along with  Iffy Udanoh, who trained with the Golden Eaglets in Abuja before the 2019 FIFA U17 World Cup.

Okagbue is provisionally cap-tied to the Republic of Ireland having made his competitive debut for their U19 team in a European Championship qualifier against Montenegro in November 2021.

He has been invited to train with Stoke City's first team on multiple occasions but has yet to make his professional debut.

In the current season, the center half has been involved in 10 Premier League 2 matches and also tasted action in the U18 Premier League and FA Youth Cup.

The 17-year-old Okagbue turned out for St Kelvin's Boys and Bohemians prior to his move to Stoke City.