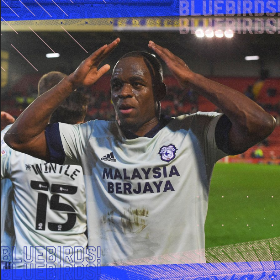 2015 Nigeria U23 invitee Uche Ikpeazu has revealed that he spoke to two of his teammates at Middlesbrough before his loan move to Cardiff City on transfer deadline day in January.

The Anglo-Nigerian center forward sought advice from former Cardiff City players Sol Bamba and Lee Peltier, and they told him good things about the club.

Uche had no choice but to agree to a loan deal in search of regular game time following Middlesbrough's loan capture of Folarin Balogun and Aaron Connolly from Arsenal and Brighton & Hove respectively.

The 26-year-old was also competing with Andraz Sporar, Duncan Watmore and Josh Coburn for a spot in the attacking third.

"When I had the option of joining I wanted to do it. There has always been something about the Club I always liked," Uche said to the official website of the Bluebirds after the game vs Barnsley.

"Cardiff City are an amazing Club and I love the stadium. I spoke to Sol Bamba and Lee Peltier, and they said that Cardiff City are one of the best Clubs they've ever played for.

"I want to help this team climb up the table. Cardiff City are one of the best teams in the Championship and should be higher up the division."

Uche marked his Cardiff City debut with the winning goal in a 1-0 victory over Barnsley at Oakwell on Wednesday night, nine minutes after coming off the bench.

The physical Cardiff City number 10 flicked the ball on to himself, held off a couple of defenders and slotted past the Barnsley goalkeeper.